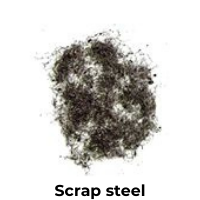 From the recycling process, a considerable amount of steel comes from the used tyres. This is then used by steel factories.

Steelcord scrap is shaped in chopped wire form (wire diameter: 0,20 - 0,80 mm) and is obtained through the grinding of waste tyres, after a magnetic separation from the rubber granules. 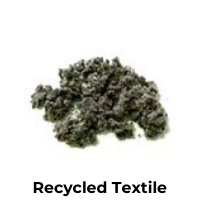 Vehicle tyres contain textile in various percentages depending on their type. During the granulation procedure, textile is being separated from the other elements and then sold as an alternative fuel with a 7.200 KCal / Kg heating value. 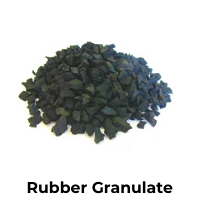 What is the advantage of Crumb Rubber for athletic fields?

Crumb Rubber gives athletic fields the extra cushioning and bounce that rubber is known for, which is a real boon for athletes! And Crumb Rubber is a terrific asset in wet weather, since it dries instantaneously and provides the extra traction that keeps fields safe, even after the rain.

No. Crumb Rubber passes through state-of-the art magnets, a process which completely removes any residual traces of steel. These extra precautions enable Crumb Rubber to be guaranteed 99.99% steel-free.

No. The process that all tires undergo renders them basically indestructible. Since Crumb Rubber is made of 100% tire rubber, it cannot decompose or crumble.

No. Crumb Rubber holds on to just enough moisture to prevent dust and slipperiness from building up, while draining excess moisture almost instantaneously.

Do winds and rain blow or wash Crumb Rubber away?

No. Crumb Rubber gets incorporated into the ground surfacing, and will almost never be impacted by winds or rain.

FIFA President Joseph S. Blatter has a clear idea when it comes to raising the standards of the beautiful game. "As football's world governing body, we have a responsibility to support any move to improve football equipment," he said. "In raising the standards of footballs and football turf surfaces, the FIFA Quality Concept will also help improve the level of the game." 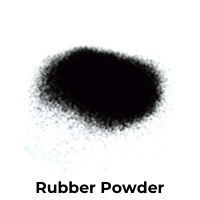 Rubber granulate can be turned to rubber powder which can be used as raw material in various applications, such as Rubberized Asphalt Concrete (RAC), also known as Asphalt Rubber. This is pavement material that consists of regular asphalt concrete mixed with crumb rubber -- ground, used tyres that would otherwise be discarded.

Use of rubberized asphalt as a pavement material was pioneered by the city of Phoenix, Arizona on several area freeways in the 1960's because of its high durability. Since then it has garnered interest for its ability to reduce road noise. In 2003 the Arizona Department of Transportation began a 3 year, $34-million Quiet Pavement Pilot Program to determine if sound walls can be replaced by rubberized asphalt to reduce noise alongside highways. After about one year, asphalt rubber overlays resulted in up to a 12-decibel reduction in road noise.

The use of rubberized asphalt was pioneered in the 1960's because of its high durability. Other benefits of Asphalt Rubber:

Reduction of road noise up to 12 Decibels

Improved resistance to surface initiated and fatigue/reflection cracking due to higher binder contents and elasticity.

Increased viscosity that allows greater film thickness in paving mixes without excessive drain down or bleeding.

Improved aging and oxidation resistance due to higher binder contents, thicker binder films, and anti-oxidants in the tyre rubber.

Improved safety due to better long-term color contrast for pavement markings because rubber acts as a pigment that keeps the pavement black longer.

Savings in energy and natural resources by using recycled products